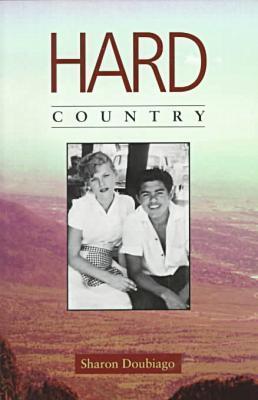 Sharon Doubiago’s first book, the epic poem Hard Country was published in 1982 to the acclaim of a wide number of poets and scholars. Hard Country tells the story of the breakup of a marriage, the meeting of a new love, and the subsequent journey the new couple make across the U.S., climaxing on the Tennessee Valley Authority lake where his mother drowned herself when he was ten. Through the whole journey the narrator is mourning her lost husband. Hard Country weaves the personal, the public, the political, the personalities, the history, geographies, lore and mythologies of the states they move through, going north, east, south, then returning to the Pacific Coast.

The critical study Forms of Expansion/Recent Long Poems by Women, by Lynn Keller (University of Chicago Press, 1997) begins with Hard Country. “Expanding the boundaries of both genre and gender, contemporary American women are writing long poems in a variety of forms that repossess history, reconceive female subjectivity, and revitalize poetry itself... Lynn Keller explores... the diverse traditions and feminist concerns addressed by poets ranging from Rita Dove to Sharon Doubiago, from Judy Grahn to Marilyn Hacker to Susan Howe.”

“A quick count reveals that Hard Country,” Robert Peters wrote, “has nearly 10,000 lines, all readable, gripping, and never flagging. What an achievement! A orchestration of modes and themes in the grand Whitmantic Projective verse manner, lavish with explorations of American history (the struggle for the West, the American Civil War, Viet Nam), primitive myths, the poet’s personal and family histories, her restless wanderings after archetypal lost lovers, the subterranean connections of male and female, and these counter culture considerations, pop celebrities, literary figures, ecology and hallucinogenics ...Her writing contains much of the purest free verse written since Robinson Jeffers, D.H. Lawrence and Kenneth Rexroth. One poem, “Sitting Bull,” serves to introduce Doubiago’s talent... ”

...They pulled him from his cabin at dawn
warning they would kill him if he fought.
Suddenly, stubborn like a bull,
he planted his feet on the ground
and said I’m not going. And then it was

the sun eclipsed and the earth opened
and in a great landwave slid over him
and the tall stems of prairie grass
at Grand River where he was born,
to which he returns again ,
brushed against his eyes

and he saw what he will see
so long as the grass may grow
though the plains turn to a bowl of dust
a pale sickly child named Europa
swept away on the back
of a sacred White Cow.

The Spring l997 issue of Contemporary Literature (University of Wisconsin) features an extensive interview of Doubiago, focusing on her history and development as an epic poet, by Jenny Goodman. Also by Goodman: "Bearing an Unbearable History: "The Adoption of the 'Feminine I' in Sharon Doubiago's Hard Country," Special Issue on American Women Poets and the Long Poem, ed. Kathleen Crown, Women's Studies 27: 1998, Vol 27; Sharon Doubiago and Muriel Ruykeyser’s long poems, Jenny Goodman, However. Rutgers University, April 2000.

The March/April 2001 issue of The American Poetry Review features an essay by Alicia Ostriker, "Beyond Confession: The Poetics of Postmodern Witness, Adrienne Rich, Carolyn Forche and Sharon Doubiago."

L.A. Blonde
(For barry eisenberg who, on finding a photograph of me at sixteen as a beauty queen parading down Main Street on the hood of a baby blue Thunderbird said, "God, Sharon, you have a lot of karma to work out.")

Shadow and light
of the groundswells, the highways and beaches
washed clean by Santana, hot
Grandmother of God and hard rains
in an hour, the danger then
in the dry beds of flash flood,
the swollen arroyos
that undermine every house in the foothills.
The danger then of the city
pushing you off
into the unwatered desert.

The way on winter days
it's almost light enough
to photograph something like
angels in the Eucalyptus, the one hundred
varieties, and hummingbirds,
symbol of resurrection, hovering
the cacti gardens.
And high over the bird of paradise,
palm and poinsettia,
vulture
that only light has blinded
to the secret
of bougainvillaea.

Marilyn Monroe said she was always running into
other people's unconsciouses.
You lift the hand from the pale ice of your gown
to the dark electricity of air.
The sun heats the hood, turns your shoulders red.
You wave along the collective stare lining the boulevard.
In the blinding light they appear
like a negative risen from solution,
the skin black,
the eyes, hair, teeth, and nails,
as they roar Blondie!
bleached out.

Something lifts me from her
once a warm bath I lay in,
now, who shudders in a great blow
that goes through me, then grows cold.

The white river I suck from her
turns to red, bitter blood.
A heavy snow begins to fall.

Under the blue starlit tipi of night
I can see them
beneath the drifting snow,
huddled heaps, scattered bundles and clots.

When the sun returns
ice slashes me like knives
glistening red
in the morning light.

The wind comes up and I become
a frozen knot
that will never be untied.

I ride in his arm on horseback
across the blinding world.
He is a man who sees things
that makes his body shudder
worse than hers.
He cries wounded, our knees
are gone now. His tears
fall on me, a warm thaw.

Later he says
Open your mouth.
We have no choice.
I will let down the milk for you
from the father river
of my breasts. What we are
is what we are. Why else
would I have them?

I name you
Little Mocking Bird
for life.

In a past life, Love
we crossed the sea in a great wave
before it was uprooted

Through dreams of water and former cities
we came

settled these parts
with mountains running up like walls,
passes to valleys
leading nowhere.
We told
no outlanders
our tales.

Your hand touched the night.
I parted the darkness.
Our great blood circulated round
a Blond’s face.
Our legends scattered the Jews’
lost colony.

Somewhere south of here, divers search
for the body. Cold, dumb fish. We could be
Japanese.

Take your mind
clean away.