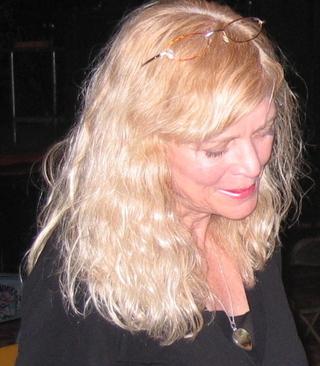 Sharon Lura Edens was born and raised in Southern California to young parents recently from the South. She married George Doubiago two weeks after graduating from Ramona High School; they have two children, Daniel and Shawn. She received her BA and MA degrees in English from California State University, Los Angeles. With the exception of two American Literature classes that taught H.D., Charles Olson, Robert Duncan, William Carlos Williams, Jack Hirschman, the Donald Allen New American Poetry Anthology, etc., she was educated by New Formalists who taught their aesthetic as the only aesthetic. Upon graduation she made the vow never to be a poet.

The vow lasted five years. She dropped out, became an at-home countercultural mother, an anti-war activist and a Joycean scholar—she wrote a book on the Molly Bloom soliloquy (see “Joyce” in The Book of Seeing with One’s Own Eyes). In her self-imposed “creative” muteness she became a serious student of the language, the culture, and of nature.

With her children and partner, she lived two years in Plainfield Vermont, home of Goddard College. Near neighbors were Louise Gluck, Rita Mae Brown, Richard Grossinger, Lindy Hough, Lorrie Goldenshon, Ellen Bryant Voight, John Ashbery and other raging poets—Vietnam vets, feminists, back-to-the-landers. There were readings every night; she attended most of them, taking in the many different styles, approaches, attitudes, and aesthetics. Within in a month of returning to California, to the Mendocino Coast, she gave her first poetry reading and began her first published book.

Two weeks after completing Hard Country, inspired by the American and gender themes the work had engaged her in for three years, she embarked on a bus journey with her 15 year old daughter to Macchu Picchu. South America Mi Hija was nominated twice for National Book Award and was named the Best Book of the Year by the LA Weekly. When they returned and her daughter set out on her own, she did too.

She has lived much of her life since in three vans—Roses, Psyche, and Valentine—writing full-time rather than working full-time in order to write part-time. Some of this life is chronicled in the prose stories, El Niño (Lost Roads Press) and The Book of Seeing with One’s Eyes (Graywolf Press). The Book of Seeing was named one of The Ten Best Books of 1988 by The Bloomsbury Review. It also received Gloria Steinem's Woman Writer Award, and The Woman Writer Genius Award from The Kentucky Foundation for Women. It won second place in The Oregon Book Award for Fiction (named first place by The Oregonian). The story “Raquel,” won first place in Non-Fiction from Writers At Work, and the title story won a Pushcart Prize for fiction. In 2005 The Book of Seeing with One’s Own Eyes was selected to the Oregon Culture Heritage list: Literary Oregon, 100 Books, 1800-2000.

In the 1980s she was based in Port Townsend, Washington and active in its powerful literary community—Empty Bowl, Copper Canyon, Graywolf presses, and Centrum—and since has lived in the vital artist Oregon communities of Portland, Newport and Ashland. Currently she lives in San Francisco.

The Husband Arcane. The Arcane of O (Gorda Plate Press), her third published booklength poem, was written out of the crisis she and the country experienced with the murder of Nicole Brown Simpson and Ron Goldman, most likely by the football and actor hero, O.J. Simpson.

Her other major books are the poetry collections Psyche Drives The Coast (for which she won The Oregon Book Award for Poetry) and Body and Soul (which includes her third Pushcart Prize winner). Love on the Streets, Selected and New Poems, was published by the University of Pittsburgh in November 2008.

Memoir, starting with the still unfinished Son, has been an important focus for the past twenty years. Son focuses on the mother-son relationship and her son’s life as an athlete; he played five years of professional football. Published chapters received two Oregon Institute of Literary Arts fellowships, Sigma Delta Chi’s Sports News Reporting First Place Prize, Tom Robbin's Journalist of the Year Award (“for the most outrageous, risk-taking, life-affirming article published in the Northwest”). My Father’s Love, Portrait of the Poet as a Young Girl, 2 volumes, (Summer 2009) is a memoir of her childhood. Her new collection of memoir stories, Why She Loved Him, is circulating.

She’s been a Visiting Writer at many colleges and an on-line mentor in Creative Writing for the University of Minnesota’s Split Rock: onlinementor@umn.edu . Currently, she’s a board member of PENOakland.